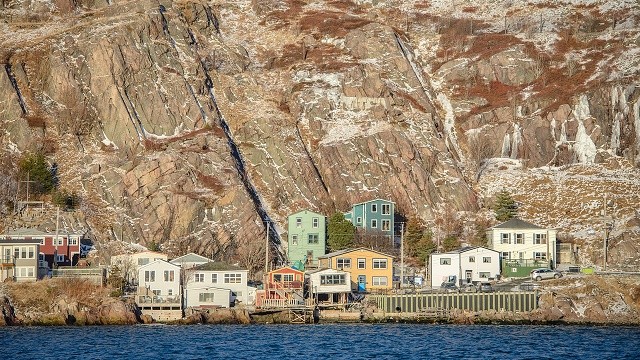 What is it about the natural landscape of our earth that opens us up, grounds us and then brings us back to ourselves? When we pay attention to waves slowly making their way into the shore, cliffs soaring over vast sea, emerald green trees surrounding us on all sides, the unfinished rocks under our feet, we are engaging with the world in a way that we are often taught to ignore.  The society we live in throws us different variations of: get things done, move forward, achieve success, be smarter than you were before, aim higher, give more of yourself, live longer, look better etc.  These messages fly at us every day through all that we see, hear, touch, feel and experience in our homes, workplaces, schools, and every day life activities.  But, the natural landscape whispers something different, and sometimes it shouts out loud, reminding us that we are already at home in the world and in ourselves if we choose to pay attention.

I recently went away for a week long trip to Newfoundland.  It was a time for me to seek solitude and landscape in a place that was foreign yet familiar.  The name of the place is telling. When Giovanni Caboto (or John Cabot according to most history books) “discovered” this new land (“New-founde-lande”) on June 24, 1497, he acknowledged that it was like nothing he had ever seen before.  Although the island of Newfoundland had been inhabited for several centuries by indigenous people like the Beothuk, the Innus, and the Inuit, Newfoundland and Labrador were new territory for the Europeans who were out to discover and conquer the world.  A different variation of the usual colonial story is applicable here, where due to the negligence and inhumanity of many of the settler populations, the indigenous communities and ways of life that once thrived before the arrival of the Europeans was destroyed, and entire populations and communities were eliminated due to disease, violence, and/or displacement.  The European settlers acknowledged a new land that had already been found by others, but those others were not acknowledged as the keepers of the land.

Steeped in this type of history, Newfoundland is an interesting place filled with stories, mythologies, songs, and art, based on the people who were there.  And all of this in the midst of a stunning landscape of the Atlantic Ocean, the coastline filled with stunning cliffs and jutting rocks, green mountains, wide forests, shimmering lakes, winding rivers, wide hills, and open plains. During my trip I did a lot of hiking, trying to connect to the earth in a way I had not in a long time.  One of my most memorable hikes was one where I experienced walking on the earth’s mantle.  The mantle is that part of the earth that lies deep beneath the earth’s crust, impossible to get to without drilling more than 35 kilometers into the ground.  But, due to an amazing, gradual continental collision that took place across the earth’s surface over millions and millions of years as, parts of the earth’s mantle were pushed upwards and then remained after glaciers melted and water receded. I walked on this earth energy that had once existed buried under the earth’s crust, seas, and other natural phenomena.  The hike involved climbing up a steep rocky landscape known as the Tablelands, where I was forced to watch every step I took mindfully, making sure I didn’t slip on an unsteady rock and fall over.

In this way, the landscape of the Tablelands encouraged me to stay right in the present, where I needed to be, to take step by step as I climbed a steep series of rocks, in order to get to the top.  Once I reached the top of the hill, I looked down below at the landscape in front of me.  I was surrounded by hills, mountains, green, grey and all shades of brown.  I saw the Bonne Bay glittering in the sunshine, its blue waters reflecting the light like a mirror for the universe.  Mostly, I felt my body connected to the ground and to the earth.  I could feel that as much as my body was aching from the steep climb, and as much as my breath was wavering occasionally due to exertion, I was walking on a landscape that carried immense energy and history, and this made all of the dark moments of the hike worth the effort.

Hiking the landscape was a huge part of my trip in Newfoundland, but I also spent a lot of time hovering on different parts of the coastline, near lighthouses, among seagulls, staring out at the mysterious Atlantic Ocean.  The Atlantic is a dark, deep ocean, full of secrets and stories.  People who observe the waters closely can glimpse whales, seals, and even icebergs floating through during different parts of the year.  As I gazed away from the land I really felt that I was up close and personal with the vastness of our world.  When I stared out at the ocean, it became clear to me that I am both nothing and everything all at the same time.  This is very grounding, especially when the society we live in keeps knocking us down, telling us that we have not come far enough.  The Atlantic Ocean was saying to me, you have nowhere to go.  Just be.

Then there was the open road that I drove on every day, the curvy, bumpy scenic routes and the Trans Canada Highway that I traveled on to get from place to place, whether a tiny fishing village in the North of the island, the national park on the West end, or the capital in the East.  The road stretched out long before me with forests of trees and hills on every side, engulfing me.  I could see that no matter how far I had to go at a stretch, I was able to reach my destination while also appreciating all the beauty surrounding me.  It was an exercise in present moment awareness, in appreciating the journeys that we take, and relishing the experience rather than craving the end goal.  Making sure to stop along the way, to hydrate, to recharge, and then to set out again.

These are just a few examples of how the landscape of Newfoundland spoke to my heart.  I returned to my home in Ontario refreshed and wiser based on all that I learned from the natural world.  The sea, the earth, the sun, the stars, the moon, the trees, the mountains, the moose, the butterflies, the puffins – they all taught me more about my own power, beauty and strength. We humans keep forgetting that we are a part of the world, and not separate from it.  We are part of the wonder of nature, and going back to the landscape thankfully reminds us of this.