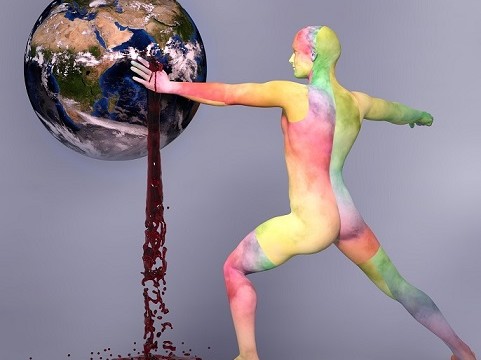 Last night the train came to sudden halt at the subway station. It didn’t start for a while and we heard an announcement that said something is wrong with the electricity and that it might take a while. Unfortunately, even after hearing this my thought was, “What if this is someone attacking us? May be someone’s gone crazy again and now is targeting one of us – and that could be just anyone, whoever the attacker fears at that point in time!”

Luckily, my imagination stayed there but I realized then that this is the reality of today. The world is a lot more unsafe than it was even a year ago, or even a month ago. I came across this video, which kind of summarizes my feeling of uncertainty:

Thankfully, there are many people in the world expressing their concerns about lack of respect for diversity, lack of representation of diverse cultures and lack of opportunities for everyone. Our pasts are quite similar – whichever part of the world we have come from; we all have been oppressed at different points in time, we all have been oppressors, we have been at an advantage or at a disadvantage and all of these states have been contextual. We all know how it feels to be left-out, to be accepted, to belong, to be alienated, don’t we? We don’t have to be a part of any historical movement to know this – we experience this or have experienced this just by virtue of having lived for so long!

Why is it then so difficult for us to embrace the past and move into a future that has place for all? This video by Riz Ahmed identifies our lack of inclusiveness today:

He somehow feels Hollywood is more inclusive, but we know that the reality is quite different! We need further his speech and say that even India, which is a diverse nation needs representation in the mainstream from Kashmiris, the North-Eastern states and other misrepresented or under-represented regions. Are we really a globalized world? We don’t seem to be heading there politically.

I guess those of us in positions of power, need to make room for diversity in all aspects of life, allow our children to make friends with neighbours of all colours, accept and learn about other languages and cultures, and form new communities. If we are not aware, we might just create tighter, non-inclusive units, which will only harm our future.

Homepage » Arts and Culture » If you prick us, do we not bleed? – Deaths, Identity, Representations
← Previous Post Next Post →