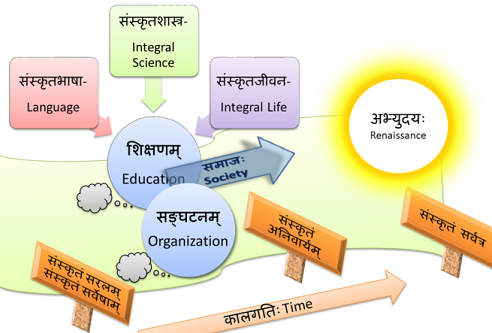 It is quite cliched, but very true that when you move away from your homeland, you start valuing it more. It was no different for me. To different people, the attraction to one’s homeland is initiated in different ways and to me, it was language that attracted me the most – especially Sanskrit.

I learnt Sanskrit in school, right from my childhood, but I learnt it in the grammar-translation method, as it was taught to us in schools. I never spoke in the language. This was quite strange to me, because we spoke every other language we learnt, except this one. But this didn’t bother me much, because the aim was to ‘score marks’. That was really the place of Sanskrit in Indian schools, it is a ‘scoring’ language, unlike the others, because one can easily learn things by rote and vomit it in the answers.

Then I encountered Samskrita Bharati, while I was studying in IIM Ahmedabad. They conducted sessions in spoken Sanskrit and their manner of teaching was very different. I learnt to say a few sentences in the language. I was excited to no bounds, because my mother who was a Sanskrit teacher, could not teach as much as I did! And on moving to Toronto, that was the first thing that grabbed my attention. I think home-sickness has some benefits, and learning Sanskrit is my benefit!

My wife and I both attended the shibir in the US in 2010, conducted by Samskrita Bharati and we made it a practice to speak in the language at home. For example, “Kunchikam kutra asti?” (Where are the keys?). So such daily conversations we prefer having in Sanskrit. The merits of this has been several-fold – now I speak my mother tongue extremely well. My mother tongue is Gujarati and Sanskrit, being the one of the oldest languages has something in common with everything. For example – Jalam means water in Sanskrit, which is Jad in Gujarati, Jal in Sanskrit and Jalam in Tamil as well.

Now I know the root of Gujarati words in Sanskrit when I use them and sometimes my Gujarati is so ‘pure’ that even my relatives living in Gujarat are quite shocked to hear me speak! More than that, it has opened my doors to several Indian languages. I feel like a cousin of every Indian I meet, because I see that we have so much in common, than the differences which usually get emphasized. Also, I feel like a cousin of several other races – example, in Sanskrit – Chashakah is Glass, in Russian it Ctakah! So the words may not be the exact same, but there are similarities. I guess through Sanskrit I have learnt to focus on similarities than on differences!

I understand the real meaning of Vasudaiva Kutumbakam (The world is one family) and Sarve Bhavantu Sukhinaha (May everyone be happy) instead of just saying these. Sanskrit is a language of peace, because it constantly talks of such divine values. I have understood the influence of this language in our lives and I feel if we are all taught Sanskrit, we would learn these ideas and have a peaceful co-existence.

There is so much wealth in the language – there is Vriksha Ayurveda – environmental science, which teaches us how to be in harmony with nature as we progress. And the literary works in Samskritam are deep, and replete with world-knowledge.

In the 20th C, Sanskrit came to be known as a casteist language, which I find very untrue, because the epic Ramayana is written by a hunter! It seems that it was in the interest of the colonizers to separate us and keep us away from the wealth of our language, Sanskrit. We have as a culture, assimilated everything and grown, but only the Britishers, had divided us and had distorted our perception of our own world and culture! There are enough examples of people from different walks of life being portrayed as knowledgeable all through our literature. Most people who talk about the ill-effects of Sanskrit have not taken the time to read and understand the language.

Most of the Sanskrit slokas are written in metaphors and  all of them are for enlightening the human being. But to get to the root of the meaning, one has to understand the language. Sanskrit is perhaps the only language in which the verb is conjugated for two people – there is singular form and plural form, but Sanskrit takes into to account, two people, which isn’t considered plural. Then there are Lakars – moods and tenses, which makes one constantly aware when one is speaking.

Our Samskriti is about self-awareness, it has always been, hence our language also propagates that. I am usually meditating while speaking the language, because it leaves me no choice, but to be aware as I speak! I would definitely urge everyone to study the language, because t is really the need of the hour. We must, more than at any other time, see how similar we all are and Samskrita Bharati is doing everything it can to heighten this awareness. I sincerely wish “Sarve Bhavantu Sukhinaha” and pray for Samskriti (it loosely translates as culture) to take over for a peaceful world!

Homepage » Arts and Culture » Sanskrit is the need of the hour and everyone must learn it!
← Previous Post Next Post →