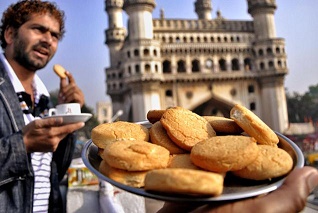 As someone who feels more at home in Hyderabad than anywhere else in the world, I obviously want my city to demand the same amount of awe as some of the bigger cities. When people say “I am from Mumbai” or “I am a Delhi girl” or “I grew up in New York”, they expect us to fill in the blanks and understand everything about them. When I say I am from Hyderabad, all I get in response is “Man, I love your biryani.”

Well, 8 million people should not be defined by the taste of their admittedly awesome biryani. Hyderabad is a small city. The kind of city that people don’t write songs about. It is as infamous for its unrefined palate as it is famous for its caution-to- the-wind appetite. It is part rustic charm and part globalized metropolis. The diversity of its residents is well beyond what a city this size can afford, and that leads to an uneasy equilibrium.

A city that has been home to a flourishing kingdom, a city that was under siege and forced into India, and more recently, a city that was the eye of a political storm that affected 85 million people for over a decade, Hyderabad has a lot to say. Yet there are surprisingly few stories about this enchanting city, because the people from there are just that – more chilled out and less dramatic. And that is a problem. Not having a voice is not having an identity. People from Hyderabad are often bunched together with other cities, and almost never allotted the dignity of recognizing its uniqueness.

I have fiddled with that question over the last 15 years – ever since I left Hyderabad for the first time and met with expat Hyderabadis all over the world. Now I realize that the answer was staring at me in the face all this time, but it was so obvious that it was invisible. Hyderabad is a city where legendary friendships are born. I cringed at using the word “legendary” for a bit, but then I realized that there is no other way to define them.

If you are not from Hyderabad but have a friend from there, I dare you to say that it is not true. If you are from Hyderabad, then you know what I am talking about. The combination of a laid back atmosphere, a nothing to lose perspective and being the right-sized city when we were growing up gave us this amazing opportunity that no other place does. People are either too busy or too focused or too result-driven in most cities of the world. But not us – at least not the ones born in the 20th century.

Our friendships are defined by the liberties we take with each other, by the extent to which we go to help out a friend. We may spend most of our time just hanging out and messing around, maybe we do not have “deep” conversations, but the way I see it, we don’t need them. We can literally knock on anyone’s door at anytime and ask for anything – friendship without barriers.

Kids that grow up in Hyderabad make friends for life. I will not patronize you by attempting to define friendship here, but if you have ever run into a Hyderabadi, then you already know this from experience. So I hope the next time I introduce myself as someone from Hyderabad, you know exactly who I am, a guy with some serious friends.

And hopefully you will be one of them.