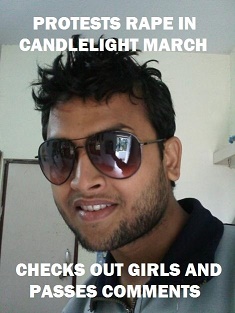 It’s our ritual to meet up once a month over a drink-cum-discussion kind of scenario. The issues come under discussion range from society to individual insights. Our group of friends consists of people with diverse backgrounds; some are moderate liberals, few consider themselves socialists, others found nirvana in atheism, and one or two once were dry religious and now they enjoy not being under constant pressure of wearing a poised persona. And not to mention that some of them are highly opinionated and they utter final judgments with end-of-the-world-expression on their faces. One thing that makes the group unique is that everyone has spent his or her prime in activism, social or political movements. And not to mention that we all are Desis, hooray!

Sometimes we try to touch a subject that often turns out to be beyond our intellectual capacity; google comes to our help when quick reference is needed amidst the crossfire of heated debate.

On one such occasion, “Can a man, to be more precise, an Asian man, be a feminist?” Asked our middle aged friend while puffing a cigarette. It seemed like he asked the question for shock value.

The question brought in a long moment filled with deep silence.

“Well”, breaking the silence responded a friend, clearing his throat as if someone was trying to wake up in the wee hours, “ Because we are men and it is an unmanly thing to think –  feminism is meant for women not for us.” The respondent said it chewing each and every word in his mouth.

“Why did Bernie Sanders once claim that he is a big feminist if it is considered to be a women’s domain?”, said the first friend, while raising his one of eyebrows. Unfortunately, the question did not lead to a full scale debate. No one seemed interested.

The only woman in our group felt that we were all chauvinists and not really ready to deal with equality. She didn’t think we had transformed even as immigrants.

Later I thought, why do we brownies (of course generally speaking) love to debate issues and politics but when it comes to our own behavior or understanding towards our counterparts, we find it a not so thrilling a subject to deliberate, not even for the sake of our own betterment.
I decided to follow up and ask the same question to a few non-desi (saying non- desi is not racist by the way!!) and a couple of desi friends individually.

What I found was not surprising. In brown circles feminism is an alien idea. Not that we aren’t familiar with it, just that the concept is simply not integrated with our daily lives. Some attached it to religious notions, and a battle for dominating each other, others view it within their cultural norms of where they come from. On the other hand, I found that in my non- desi circle respondents, mostly European and Hispanic Americans, were a bit articulate. But none of them took feminism as a political movement generated by and for women in a broader gender context of political, social and economic equality.

To my own understanding, it’s simple that half of the world’s population, the female segment demands equal share as men. But it’s not as simple as it appears to be. I asked my sister-in-law, who was born in England and raised in America, but she does not consider herself a feminist. She is quite vocal for women rights, though. I have been googling for last two hours and I am still unclear if I am a feminist.
The more I googled to get an understanding, the more it got me confused. Perhaps you might have thought that I would lead the conversation to logical conclusion, but I don’t have one folks!

I am neither trying to form a particular definition towards feminism nor was I aiming to get certain answers to the question. I just wanted to ask you guys why men and women should not have equal rights, equal treatment, and equal opportunities. What’s wrong in it? If this is called feminism than why men and women cannot be both feminist? Or this is not as simple as it appears to be?

Tarik Zia is a former Pakistani journalist who worked in national newspapers, television and magazines. He now lives in the USA.

Homepage » Arts and Culture » Why do South Asian men have a problem calling themselves feminists?
← Previous Post Next Post →