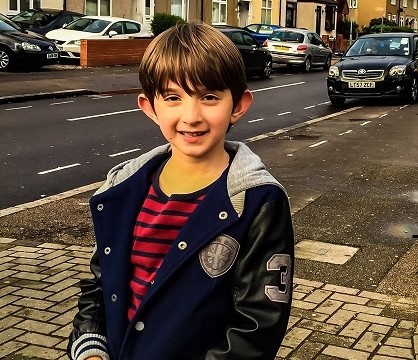 Zbigniew Chertlur, fondly known as Bujji, started singing in Jan 2016, inspired by his father Sharath, who noticed his potential for picking up songs. He was singing a Spanish song which he heard on TV just once! His father, who is Telugu, then encouraged his son to pick up long lost, melodious Telugu songs.

It worked in Sharath’s favour that Bujji loves Indian gods and Indian culture. He is brought up as a Polish, Christian with Hindu leanings, one could say as he really likes Hanuman, Krishna, Ganesha and Shiva. Influenced by Ganesha, Bujji loves laddus, the only Indian sweet that he likes! During our phone call, Bujji excitedly mentioned that he has to watch a TV show, and I realized later from his dad that he was watching Ramayana!

Bujji knows stories from Ramayana, Mahabharatha and even the Puranas. His first Indian prayer was “Shuklam Bharadaram Vishnum”, which he pronounces quite well for someone who does not speak any of the Indian languages. He only speaks Polish and English, but sings Telugu songs. Most Indians find it very surprising that he pronounces Telugu words they way they must be pronounced.

Now that he is exposed to both Indian and Polish cultures; he finds quite a few differences – Polish people are Christian and have only one God, but Indian people have several gods. Then the flags are different, also Polish people eat a lot of bread and Indians eat a lot of chapattis. He says he likes Indian culture although he is a proud Polish citizen. He thinks Polish language is a very difficult language to speak.

Bujji, the wonder-kind, has a regular day like most of us. He goes to school from 9 am to 3 pm. After reaching home, he practices singing for half an hour. Then he reads books, at least 20 pages a day, as a rule set by his mom. He also plays for around forty-five minutes on his Xbox, monitored by his parents. He also likes playing football and boxing.

He feels no pressure in learning Telugu songs as his father teaches him only when he is ready to learn. His father picks classic and iconic songs for him. Bujji listens to them and learns them if he connects with them. He instantly connected to O Papa Laali as soon as he heard it. Nagarjuna also happens to be one of his favourite actors, so he enjoyed singing that song. On being asked about his other favourite actors; he mentions Aamir, Shahrukh, Salman and Amitabh Bachchan from Hindi and Pawan Kalyan, Mahesh Babu and of course Nagarjuna from Telugu.

Bujji is also an actor who has acted in the Hollywood film, “The Sting of a Martyr” and now is looking forward to his Telugu debut soon. Bujji is grateful for the encouragement that he has received from Telugu people for all his songs till now. He recently released Vinudu Vinudu Ramayanagaadha – which is here for us to hear!

Homepage » Arts and Culture » This 7-year old polish kid will blow your mind with Telugu songs!
← Previous Post Next Post →