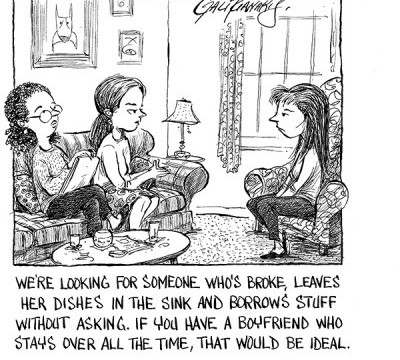 The first taste of USA can be quite daunting for any desi going to the United States for the first time. I went to the US in the Spring of 2008 to be precise, and I had around four years of work experience in India. I went there to study further, but those two years were hardly about learning from books – in fact, it wasn’t at all about what I went to learn – computer science!

I landed safe and sound and a really dear friend Jaya who happened to be one of my roommates in Bangalore picked me up, although she lived really far off and dropped me to my student home. That was really sweet of her, I realized as very few desis actually help each other when it matters the most.

From day one, your struggle begins in the US. Having lived in bigger houses in India, having 3-4 roommates is quite an unbearable thing! Sharing your personal space with a total stranger can be really very difficult.

Roommates (people) come in all shapes, sizes and colors and as much as you want someone to be a close friend it can get really tricky, if you don’t have a caring and supportive roommate. I had some really dear roommates and others not so dear – in fact not at all! The task of finding them itself is a little tough and the process starts right in India, even before moving. I found mine too in the same manner. I shared some good, bad and ugly experiences with them. Problems arose because each of us came from different social backgrounds, adjusting with those differences was tough.

I stood apart from most of the ones who had come for MS because I was four years older than the rest and had worked in the industry, and lived on my own. So this changed a lot of things.

I had lived with a lot of roommates in the past and was aware of the adjustments required in sharing space with other people. I had lived with a great bunch of friends in Bangalore when I worked for Infosys. It was quite a fun experience being by oneself, exploring the city and traveling, going on trips and so on. I am very close with all of them even today. I expected a kind of similar equation when I first came here. But sadly, it isn’t the same when you are in the United States. When money enters the equation, a lot of things change. Since most desi students have limited resources, the behaviour ranges from weird to obnoxious. The sad part is given the high rents, you can’t even live on your own.

Since I had earned for a while, I was  less stingier when I got things at the grocery store and others did not like it. I had to explain why I got brown bread or multi-grain bread when white was cheaper. Honestly, no one had asked for such explanations until grad school. I was then judged for eating at Chipotle as it was $6 per meal then. It was quite expensive for most people, so I was supposedly splurging money as I was rich. I found it absolutely ridiculous that eating at Chipotle could categorize one as rich! Being vegetarian my options were only Subway and Chipotle.

Food is one thing, but I was also asked to use toilet paper judiciously! I supposedly didn’t need to use as much as I did, because others didn’t use it in the same way. Ass-wiping being a topic of discussion, was completely out of the world for me! IMHO living with women in general is more difficult than living with guys, because most guys I know, didn’t have such discussions. Women have their own antics and their own way of thinking, I guess.

I guess my age and experience had a lot to do with things I considered worthy or unworthy of discussion. Eventually I made friends around my age, which really helped me stay sane. I made a great friend who ended up inviting me over for typical Maharashtrian meals like poha and chai. I ate a lot of what he cooked over two years of grad school. It is important to have good friends on campus and I was glad that I eventually did end up making a few good friends; desis as well as non-desis.

I, till today, am grateful to all those lovely friends who helped me in my low times; helped me code, taught me algorithms and took me out for dinners on weekends. I learnt a lot from all of them, not just programming or coding – something much deeper than computer science, I learnt about people. I am especially thankful to the friends who patiently coded with me in Leavey or SAL. It was quite wonderful to celebrate with food at 2 am at Denny’s after achieving some milestones in coding.

Software developer -Just another brick in the wall. Singer, Blogger and Wannabe Dancer. Love to travel and experience new food each place I go to.

Homepage » Arts and Culture » Why every desi should at least once, study in the United States
← Previous Post Next Post →