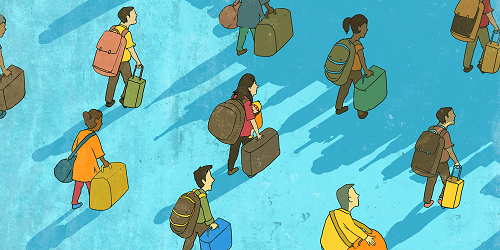 The world was hazy when I landed in Toronto. It was my first flight out of my country and I did not know anyone at all in Toronto. Through the Consulate in India I had found a person who was supposed to pick me up. He didn’t reach for almost 20 mins. My heart raced; I had thoughts of leaving the country and running away. I managed to find a public phone where the first call was free, and called him. He was on his way and that calmed me down a bit.

I had left my kids and my husband back in India for a better life, but here I was having second thoughts right on landing! Somehow I managed to find an apartment with a roommate in a week. Then on it was almost a nightmare, I spent almost five days without food because I was in shock. “What was I doing in this strange land? I had left my plush job and my family behind. I must be a fool!” Those were my constant thoughts. Between crying constantly and pitying myself, I started applying for jobs.

I managed to get a job in a college run by an Indian. I went for the interview and was offered a package which wouldn’t even cover my rent. I bargained and raised the package, to which he agreed. He agreed to $2900 a month, but because there a mistake in the contract he asked me to come another day. I was happy at landing this job. The next day I went for the contract and the numbers were completely different! It was turning out to be almost $800 lesser than what was offered to me. When I asked him about it, he gave some really strange answers like, “That’s what we discussed”, “This is what you agreed to”, and so on. So I walked away. In India I have met people who manipulate like this but I was quite shocked to find the same treatment in Toronto. May be some Indians are the same everywhere.

My next experience was completely bizarre! I got offered a job to set up a Toronto branch of a company. I was quite surprised that I was offered the job without any interview, but since I needed the job I was quite happy. But  what followed was a completely shocking experience related to fake company and finances. I was caught up in it for a couple of weeks and am totally grateful to have come out of it unscathed and wiser perhaps.

I had a similar experience with a data entry job for which I applied. This seemed more genuine at the beginning, because we had some sort of an interview, some tests of my typing skills and so on. I was told that I will be given a lap top and the software for it. They also said they will train me on the software. But I was asked to be online at 8 am everyday. I did go online for a couple of days and then asked why I needed to be online at that time, because there wasn’t any work and training was supposed to start after a few days. I was told that, that was in case I had some questions. Then I remembered my previous incident and asked him how he will pay me. He said via cheque. I was straight forward and told him about my previous experience with a fake cheque and asked for cash to be sent to me. I was unwilling to share my bank account details.

After that conversation, the guy never contacted me again! I recently heard from a friend that $60,000 were stolen from a guy’s bank account by people posing as Immigration authorities. He had saved that for his house’s down payment. These fake immigration authorities were over the phone with him for 15 hours, asked him to leave office without speaking to anyone and had a fake immigration website where he entered his bank account detail!!! My heart bled when I heard that he lost all the money and felt my experiences were not that bad. I guess there are always people ready to take advantage of other people’s vulnerabilities.

Therefore, one needs to be really careful of people who ask for bank account details or SIN numbers. Remember never, never give it to anyone unless you are triply sure of the company. And SIN never to anybody!

Homepage » Arts and Culture » How I was taken for a ride as an immigrant!
← Previous Post Next Post →