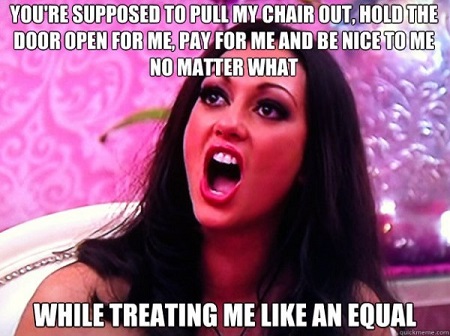 Your list of flattering adjectives to describe yourself and your Facebook quality mirror selfies do well to attract parents of well-settled, cultured, dollar earning IIT boys.

After reading these amazing descriptions of the modern independent Indian woman, a scroll down to their partner preferences can make me cringe enough to vomit out my intestines and still want to stab myself to ease the pain! Yes you are free thinking, but you will only marry in your caste. You question why educated lower caste people not give up their reservations, but never question why your parents decided to not let you marry your boyfriend from a lower caste?

You are independent, but give a salary range you expect your husband to earn, generally 1.5 times higher than your own salary. Is that the price tag of your independence?

You will still want to change your surname, why? Because you want a common identity in a new relationship. First you take your father’s name and after marriage you want your husbands. How are you independent when the keys to your life are being handed from one man to another?

You say you are against the practice of dowry, but your parents will conveniently foot the bill for the wedding because it happens only once in your life na? And of course you were told since the day you were born that a lavish wedding with an IIT/IIM boy is the ultimate goal of your life.

You say you know how to balance career and family life, but you also say you want to be treated an equal in marriage. How do you expect to be ever be treated as an equal when you accept the social constructs prepared for you by the men in your life?

Some say marriage dehumanizes you, but can you really blame your marriage especially when you use these fancy adjectives you wrote about yourself, but in reality you settled for what someone else chose for you? You betrayed your independence and your education and joined the many oppressed women of our society when you decided to change your surname and submit to the societal norms you claimed to fight against when you were in college. And you will still say “What’s in changing my last name?” Do you not know?

You will upload your honeymoon pictures with your henna, with the stamp of your husband’s name along with bangles and your mangalsutra which make you look no different than the car he bought –  but in this case he will be getting paid to use you. And then there will be the urgency to become the bearer of children, and your mother-in-law will look forward to it as if you are going to give birth to Jesus. And yes, God sent his son to suffer on earth and I think he has still kept his daughter locked at home.

And you know who and what you will blame? Societal pressure and parents! If you go as far as writing all those things about yourself without realising the real meaning of those words, blaming the society does not really absolve you of being complicit in reinforcing the barriers that this patriarchal society puts on your kind. 20 years from now you will be the same mother training your daughter to become a housewife, saying you brought her up as a son and then sold to the highest bidder.

Parents’ happiness is another overrated excuse you will use to escape the blame. My mother when asked why she got married to my father answers, ‘Because my mother said so!’. Respecting parents is different from accepting their opinions uncritically. This is something every Indian child needs to start learning for their own good.

Is there a way out of all this? Yes there is, it’s difficult and it’s going to hurt the people you love, but only if you want it. Seems like you don’t, because you are only happy talking about it – an arm chair ‘feminist’, who doesn’t even know what that term means! If you want to equality, be equal.