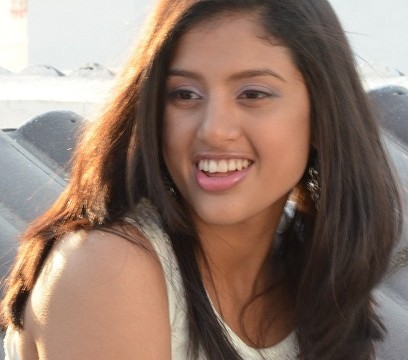 Sagarika chose “Feeling Good” to be her first cover because she feels the song has a ‘punch’ to it. To this Jazz piece, she adds her own rendering and keeps Simone’s legacy alive among her generation. Raised in America, Sagarika started learning Carnatic music when she was six and a half.

When asked about how she was introduced to music, she says, “Music has always appealed to me. I wasn’t inclined to a certain genre. My parents introduced me to Carnatic music when I was young and I enjoyed it!” Like a lot of young kids, she never took it very seriously when she was small, but as she grew up, music just got entwined in her growth. At around thirteen, she started taking it more seriously.

It was also around this time that her parents decided to move back to India. This transition was central to who she is today, because ironically, it was then that she started listening to Western Music more seriously. She was always exposed to it, as she was in the US, but in India she started listening to several kinds of Western songs as recommended by her classmates. By then she was so involved in the technique of music that she developed a strong liking for Western style of rendering as well.

Having observed the difference in both styles; Western and Carnatic, she feels that the difference is emphasized by the lyrics. Carnatic, she finds is solely devotional and is in praise of the Hindu gods, where as Western music seems more secular and inclusive. The lyrics could be about anything, just anything mundane as well. “Carnatic in that sense is pure”, she says, “I like how it connects me to god and is less mundane. But Western music has a wide range to pick from, so one can lean towards what one wants, really.” She adds, “Western music is catchy, globalized and entertaining; I really like that about it.”

She feels fortunate to be exposed to both styles because that has expanded her creative outlook. She has now started mashing up different styles – Carnatic/Western, Carnatic/Bollywood and Western/Bollywood. “I also play the guitar and the key board, which add new dimensions to my understanding of music. I feel I can do so much with music,” She says, all excited.

Acknowledging the contribution of her teachers, she feels that teachers are very important in both styles of music. “Even if you are a prodigy, guidance is essential”, She says. As she has had immense training in Carnatic classical, she started training herself in Western singing. But there was a point where she felt that she absolutely needed guidance and that prompted her to start taking classes in Western classical. Moving to India, she feels has enhanced her opportunities in singing Carnatic music but for Western, there aren’t that many opportunities.

Like a lot of Indian artists, Sagarika pursues studies and arts simultaneously. “It is all about time management,” She says, “I used to be horrible at it. But now that I am learning two styles of singing, I am getting better at managing time. I just have to do it!” Her aim is to be good at academics and music. Sagarika also enjoys attending model UNs, playing badminton, and toying around with recording software like Logic.

She is soon releasing her Carnatic/Western mash up, which we are looking forward to eagerly!

Homepage » Arts and Culture » This 15-year-old’s rendition of Nina Simone will leave you “Feeling Good”!
← Previous Post Next Post →