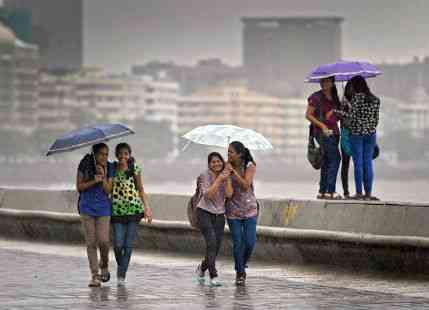 It is raining outside and the radio is playing this song. It reminds me of the cycle ride which Paul Newman takes in “Butch Cassidy and the Sundance Kid”. Being in the land of cycles and rain, this seems to be the anthem of the day.

It also reminds me of the incessant rain in Mumbai when I was trapped at home, alone when my roommate had gone to her hometown for three days on a long weekend. It reminds me of the first rainfall I got caught in when I moved to Amsterdam. I had just moved to this city and it was the beginning of summer. It still was much colder than the coldest winter in Mumbai. It caught me unawares and within minutes I was drenched to the skin and was shivering badly and luckily did not catch cold.

I was born in Monsoon. I had been told the story of heavy downpour at my birth and that my dad waded through waist deep water to reach the hospital where my mom was admitted. My first conscious memory of rain is related to school like most Indian kids. June was the month when schools reopened. I remember the road to school with a canopy of tall Gulmohar trees, and me with my dad and younger sister going to school, holding his hands.

I remember sneaking out of the house when my parents or grandparents were busy and getting drenched in rain. I remember raincoats and Gumboots (as we used to call what is known as Wellington Boots). I loved to get drenched (and my grandmother hated to wash the clothes and all the mud). Even as a child, I was obsessed with rain. I was not even scared of thunder or lightening.

I grew up in Mumbai. Rain in Mumbai is what legends are made of. It is in rain when everything stops and everything comes alive. The city itself is made of paradoxes so the rain is supposed to follow the suit. Mumbaikars wait for the rain and the moment the first drop hits the ground, they start cursing it.

We Indians are also very fond of rain. It shows in all the poems, songs, stories which usually revolve around rain. For a predominantly agricultural society, it is expected.

While I was this rain crazy person, I married a guy who hated (and still does hate) rain. We were like a couple from a favourite marathi poem of mine. It talks about a guy who hates rain and everything about it and about a girl who loves rain and everything about it. Whenever it used to rain, I would love to go out and husband would try to avoid going out. He would shut himself at home and watch Television instead of going out, not even to the balcony.

And if someone would have said then that this will change drastically one day, I would not have believed that person. But it did. Amsterdam did the unthinkable. It made me hate rain.

When I moved to Amsterdam, I heard that it rained almost through the year but I was not prepared for what it meant. It meant no sunshine, layers of clothes, sudden gush of harsh, cold wind and the worst of all, the world turns gray.

Winter rain is bad because it makes it even colder and damp. It takes away even the small figment of light which you get in that season. It makes roads unappealing and sometimes unsafe even to ride bicycles or walk.

Summer rain is worse. That is the only time when you get a better deal on sunshine. But rain takes that away. Rain makes for gloomy weather and colder climate.

When I think back, it was muddy and dark during monsoon even in Mumbai. But in tropics, we are used to so much of sunshine that a few days of lack of it does not make much of difference to us. We face the worst kind of traffic problems and derailed trains, even potholes in India. But still it felt good when it rained.

When I wonder about the difference at least in case of outdoor conditions, it is much more clean and green when it rains in India. In spite of all the mud, the trees look as if they took a shower. It also brings the much needed cold, it washes all the grime and dust on the roads. It makes everything look fresh and green.

Rain here, especially the rain in winter makes it even more gray and depressing than winter usually is; with its fewer hours of sunshine and lack of a single green leaf on any of the trees.

In Mumbai, after the first few showers, we used to start planning our monsoon picnic. I am not sure if this concept of monsoon picnic is as popular in rest of the India but it was a big deal in Maharashtra. If I mention such an idea to my friends here, they will be sure that I am certified crazy.

Rain used to mean countless hours spent with my best buddy. We used to go out on his motorcycle to our favourite place to eat. It was a small shanty (tapari as we call it in Mumbai) where we had sandwich and chai. Almost every evening after work, we used to go there and stand sipping our tea, look at the rain and talk about everything and nothing. It also mean a lot of time spent just sitting on a small bench saying absolutely nothing.

Rain used to mean one of the best days of my life. It was when I was stuck with my sister on a crowded railway platform because of the rain for six hours and spent all the time laughing at every kind of silly thing around us.

Rain used to mean the first cultural event of my college literary association. We used to celebrate it on first day of ‘Aashadh’ ( a month from the Hindu Calendar) which is Kaalidaas din. It is a tribute to his famous epic poem, ‘Meghdoot’ which starts with the mention of first day of ‘Aashadh’. We used to recite poetry, sing songs, enact skits or read stories, all about rain.

I often wonder if I were with the same set of friends around me, even in Amsterdam, would that have changed my thoughts about rain here?

Even now, when it is raining outside and all of Amsterdam is in sleeping in their homes, I remember the time when I was in Mumbai and it was raining when my boyfriend called from Bangalore to play (on the guitar):