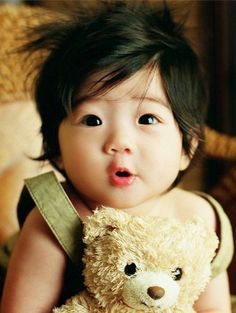 My daughter was two month old when I returned to India after delivery in Japan, my home country. Since then it has been three years. I can say India is a baby friendly country. You may not find baby friendly facilities if you are from abroad, but you can feel so much of generosity and love for babies in this country.

Whenever I go shopping, passers by give a big smile and talk to my daughter. Some restaurant waiters carry her and play with her while I eat my meals. Whenever I go for a walk in my apartment complex, neighbors talk to us, “How are you, baby? She looks exactly like you.” or “Are you giving oil massage to baby? Put a knit cap on her, it is cold!” (when it is 23 ℃)

Indian children also love and take care of younger ones very well. My neighbor’s kids often ask me, “Auntie, how old is the baby? What is her name?” This is probably because they have many siblings and cousins, and they are used to taking care of babies. Cousins call each other ‘brother’ and ‘sister’ in India and they are close to each other. They learn how to manage younger ones from childhood. I was surprised that many children wanted to carry my daughter and actually they were good at it.

Indian people have the habit of touching or sometimes even pinching other’s baby’s cheek to show their love. Some college students took photos of my daughter with their mobile phones without asking us. My friends from abroad had similar experiences. I personally do not like these habits, but I understand that they genuinely like babies. My daughter hates to be touched, especially cheeks by others but it is almost impossible to avoid it in India! In shopping malls, local markets, or restaurants, people just touch her cheeks randomly. Especially foreign children tend to get attention.

On the other hand, not everyone in Japan pays attention to babies. They are probably too busy with themselves. They even give you cruel looks if you get on a busy train with a baby stroller. They don’t say it but their eyes clearly tell you, “Why are you bringing such bulky stuff into this busy train? Don’t let your baby cry.” You get nervous when your baby starts crying in a train because it disturbs other passengers, not because your baby is hungry or sleepy. You cannot enjoy a good meal fully in a fine dining restaurant because you are worried if your children are behaving themselves etc..

When I took my daughter to a park in Japan, other children and their parents hardly showed interest in us (new faces). They just played within their close friends. And when I look back into my childhood, I was also not so interested in other kids. Since I grew up in such a culture, I initially felt uncomfortable in India when people paid too much attention to my daughter. I used to close the stroller cover so that nobody would look inside and try to touch her. However I now feel that Japanese people are colder to babies compare to Indians and I even feel a bit sad.

Physically and materially India is not very baby-friendly country, I would say.Baby care room or clean toilets with diaper changing bed cannot be found easily. I had to change my daughter’s diaper or breast feed her in a fitting room in a mall, otherwise I had to go back to my car. The only baby care room I found was messy with garbage and mosquitoes.

One British mother told me a security guard warned her while she was breast feeding her baby under a feeding cape in a shopping mall. Another American mother said some stranger tried to look into a feeding cape while feeding her baby in a restaurant. It seems breast feeding outside with a feeding cape is not common in India. I hardly see Indian mothers breast feeding outside. Actually I have not seen many mothers with infants. It is a question among my friends. Where are Indian mothers taking their babies? Where do they breast feed babies while they go out? We just guessed that probably Indian mothers have a nanny or live with parents, so mothers can leave their babies with them at home and go out. Therefore, there is not high demand for baby care room. I do not know if this assumption is correct.

I faced problems with preparing baby food in India initially as I could not find variety of packed baby food at super markets. Imported baby food is very expensive. One jar of smashed apple was almost equal to one meal for an adult. I was worried as to what I would feed my daughter, when I had to go out with her when she had just started solid food. So I brought tons of packed baby food in suitcases from Japan, sacrificing Japanese food for myself!

My-in-laws also bought a lot of “organic” baby food from U.K. However my daughter did not like any of those! It was a waste of money and food. She liked dal chawal better. Before long, I noticed that I could simply carry home-made smashed vegetables or fruits in a small container. 🙂

Public transportation and roads are not baby-friendly in India. Baby stroller is useless on roads. Once you step out of your apartment complex, roads are partly unpaved and usually full of potholes and garbage. They are dusty, smelly and dangerous. Cars, rikshas, motor cycles and street animals can come from anywhere around you – 360 deg zone. You have to be physically fit and brave enough to jump on to or hop out of a bus while it is moving. If foreigners want to go out with a baby safely, either you have to carry your baby in arms or take a car with you.

I often miss taking a walk with my daughter in a stroller, or just going to the neighborhood supermarket for grocery shopping. I sometimes get frustrated when I cannot step out of my apartment and am stuck at home with my crying baby when we don’t have a driver.

To be honest, Indian children are noisier, more active and more emotional than those in Japan. I have seen many kids jumping, running and crying at restaurants in India and adults are fine with them. Children climb on chairs with shoes, which is a taboo in Japan. I found myself relaxed with my daughter in such an environment though. Maybe kids are supposed to be like that, up to some limit. I am lucky that I don’t have to be stressed out with my daughter’s shoes or her voice in public spaces in India. Some Japanese mothers here regret to leave India for good as they will miss Indian’s generosity towards children.

Love and care for your baby is something you cannot buy with money. They come only from people’s nature. I see babies in India are treated as something valuable for all and lovable, whether they are your own or someone else’s.