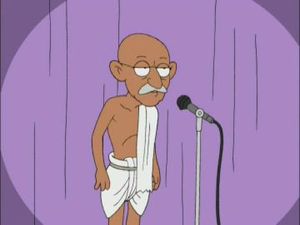 If you watched the recent episode from Family Guy, “Road to India”, you would be reminded of an India almost fifteen years ago. It was great to see women in call centres wearing half-sarees and sarees, a rare occurrence in most parts of India and definitely not New Delhi!

Although the portrayal of India is very different from reality, I quite liked what I saw. It was an outsider’s perspective of India beyond romanticizing poverty and hunger that exists there. Stereotypes are important to allow audiences to relate to a place and in that the episode did a good job, because it used stereotypes differently.

There is an article which says the season didn’t end with a bang. I beg to differ, I think it did, because the episode was not only funny but also was loaded with insights into the ‘culture’ of India. I think its Slumdog Millionaire reference also added to the humour, because in this episode the ‘Slumdog’ remains so and also loses the girl!

Although the clothes worn were a little anachronistic, it was a view of India that one hasn’t seen too often. It cracked me up!