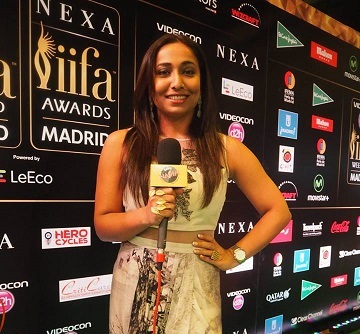 In today’s world where most of us are ridden with insecurities, Rohini has not only risen beyond that but continues to spread positivity and happiness everywhere she goes! She first rocked Singapore and now is back in Mumbai spreading her “Nasha” with her breakfast show on Radio Nasha at 91.9FM.

Here’s how she does it! “Focus on yourself and your work. There will always be someone brighter, better than you. But remember, everyone has their own audience. Even more so with the rise of digital today. Build your own fan following and ignore the trolls and haters. If you are not in front of things, ideas are nothing without the groundwork. Be involved with your job. Let it consume you. Don’t leave things to others if it matters to you. And treat everyone nicely.”

The mantra to be successful in the media? People work with people.

She thinks of radio as a beautiful and an exciting medium. “Given an opportunity, I would love to do radio all over the world!” She says with enthusiasm.

“I was always very impressed with hosts on Television. From local heroes like Renuka Shahane, Derek O Brian to Siddhart Kak to Ameen Sayani, Roshan Abbas, Simi Garewal, Maria Goretti, Malaika Arora Khan (MTV Loveline!) and international hosts like Oprah, my childhood dream was to host a show. Most people dream of becoming stars and wanting to be interviewed. I wanted to be the one talking to them. Because it requires intelligence and wit. And I was lucky to have parents who let me pursue the arts in college. My mother supported me in every show I hosted in college and after, came to every audition with me until I finally landed a radio gig in 2006. There’s all these factors that have made me who I am today.”

After being well-known in Mumbai she moved moved to Singapore. It was Love that took her to Singapore. She was a trailing spouse then lucked out and found a job in her related field. A lot of women end up staying home or quitting their careers after a move, but here’s how Rohini made it work for her, she not only found what she loved but also rocked Singapore with her talents.

Here’s how: “A piece of advice to all girls out there – if you know you are moving to a city, start looking for a job the minute you know you are going to move. I feel terrible for great career girls who are not able to find jobs because we are outsiders and it takes a while to figure ‘the scene’. Also, look for passion projects.”

She trained as a museum guide while she was in Singapore because the city has some great avenues to volunteer. She feels people should just look for those kind of opportunities. One of the most important thing she says, “And, don’t forget to be the exact same person you are before you moved there. Go out there, make new friends and trust people.” She pretty much talked to everyone because she felt that you never know how you could contribute to something they are already doing. According to her, CVs sent online have no impact – “It’s about meeting people in the flesh so they can ‘feel’ your energy. It takes time but every city has something for you to do there.”

Singapore, she found, a very eclectic market, with the audience size smaller than India, but people’s response was the same. For her, it was a very enriching experience, and nostalgia and the craze for Bollywood there amazed her.

The work cultures are distinguishable in terms of size and therefore, opportunities. She says, “India is massive. Hence the media here is also massive. The options are numerous, opportunities tremendous. A radio station in Bombay is usually part of a larger network, offices are bright and filled with exciting colleagues and talented peers. The output is so much more on a daily basis, it’s sometimes overwhelming. Singapore taught me to do a lot with a lot less. The radio station was the only Hindi station in Singapore – and as a monopoly, the pressure was a lot more to make great content everyday for your loyal audience. The major difference I also found was listeners in Singapore were a lot more attached to their radio station and everyone (desis) knows you. I really enjoyed my time there.”

The journey sounds really easy when you conquer your inner demons. Rohini, due to her profession has met so many people from different walks of life that she says, “Motivation is such an internal thing. You may have all the resources and money in the world but drive is internal. So the only thing that holds people back is people themselves.”

“I interact with some really inspiring people, thanks to my job – to give you a recent example : I met Priyanka Chopra in Madrid at the IIFA recently and she told me how she does not have a single off day in the coming year. It teaches me how one needs to be at it, day in and day out if one wants to be successful. There is a price to pay – some strike that balance, some are unable to.”

On dealing with times that are low, she says, “I am a dangerously positive person. There’s a quote I recently read : The world has almost completely destroyed me many times yet I find it more beautiful every day. I think this would be true for me. I really think the world is a beautiful place and the negativity in people can be overcome by looking at the positives in them. Also – all energy is reflected – which means – if you send a good energy, most times, you receive it back :)”

Now that she hosts on a radio station that looks at the bygone eras, she has a very balanced perspective on that too. When asked about music of the yesteryears, she says, “Every era has it’s own sound. It wouldn’t be fair to compare or say “Wow, only the 60s had good music, today’s tunes are all trashy” because we cannot forget that A R Rahman is a current composer. So is Amit Trivedi. Every era has it’s share of good and bad music. ”

“But having the privilege of hosting the breakfast show on Radio Nasha 91.9 FM in Mumbai currently – a station that plays cool retro hits of the 70s,80s and 90s – I understand from my audience that the primary reason why we love our retro music is nostalgia. It takes us back to the best times in our own lives and one understands how subjective music can be. It’s all about associating the music to your own personal life, it touched you hence you like it.”

Great things happen to good people and so we wish that Rohini inspires several people in spreading happiness and in putting a smile on people’s faces forever and ever!!