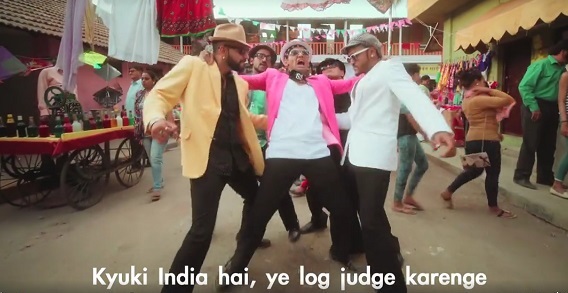 “We are all colonized”, is a statement frequently heard in most literature or arts classes. But there is a world of difference in saying it and realizing that the mind is actually colonized. The very people who say it would like recognition from England or America in their endeavors, and that’s the irony of a colonized mind!

A lot of people in India poke fun at Indian English because that is to be looked down on, but are quick to accept fallacies in the language by other white-nations.

This song I watched, a parody, captures the aspect of colonized minds really well. For example he says, Russians, French, Italians don’t really speak good English but we bow down to them because they are white. Have you not noticed that? Their accents are sexy, desirable, even though the English they speak is incorrect. But when you apply the same to South Asians, it becomes undesirable. And we rarely contemplate on the reason for it.

The song also mentions movies – and I have wondered this often, we laugh at Rajnikant but almost all Hollywood films have similar stunts where the heroes hardly get hurt. Most South Asians are willing to buy into Hollywood’s idea of a fantasy world but look down on what is created by films from India or South Asia.

But if one looks dispassionately at the trajectory of South Asian cinema (considering mainly Indian and Pakistani), there has been a lull for more than twenty years, because of the constant need to ape Hollywood. We had more engaging socio-political cinema and TV shows like Dhoop Kinare or Jaane Bhi Do Yaaron and several others which are engaging till date due to their narratives alone. But we have lost most of it to aping everything that is not of the land.

Almost all discussions about cinema revolve around – Hollywood does that, why don’t we? Why do South Asian films have song and dance sequences? Because the culture is of storytelling through songs and dances! There is just a gross disrespect towards anything that is from the South Asian culture – everything has to be white-certified. We definitely haven’t freed our minds.