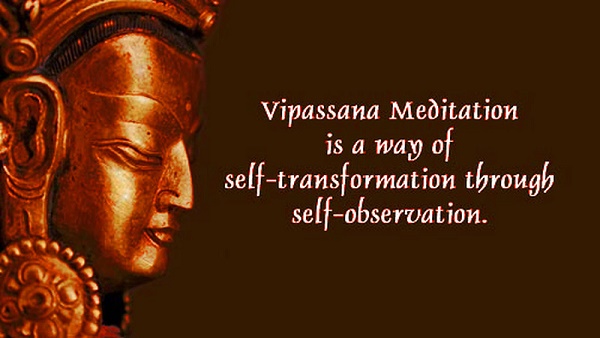 My first encounter with vipassana was in 2004, when my friend said she lost 4 kgs after being there for 10 days. “Wow,” I thought then, “I should try it too”. Along with losing weight, I felt the need to not talk. So I went there and there were several people, much older.

On the day you reach, you are expected to fill out some forms and most of the people there were much older then. One of them felt I was there because, I had boy friend issues and this, she said immediately after she asked my age! Some aunties I tell you, they are just incorrigible. After those few hours, on has to observe silence for ten days till they allow you to break that silence.

I never observed that silence other than for the first two days, because it was just impossible for me to do that. It was impossible for me to sit in one posture for an hour when they ask you to not change the posture at all. All my past came into my mind like a wave and attacked me. I was crying and crying, every alternate day, but I gave into the temptation of  breaking silence. It’s easier to do that because that’s what we are used to, talking.

So I left vipassana with no understanding of it, probably with a more inflated ego, because everyone says it is difficult and somehow I stayed there for ten days. But ONLY I knew that I didn’t observe silence as did so many others there. I came out with extreme anger, lack of compassion and without any idea to deal with them but I thought that I had somehow become ‘better’. I practiced it for a few days after getting back into life, heard the CDs for a couple of days and let life take over!

I heard recently from an aunt of mine that some people at her workplace went for vipassana and she saw no change in them. In fact, they were more reactive than before! Yes, that’s a possibility if you didn’t observe silence. My mind was in such a terrible state that even when I watched S.N. Goenka’s talks in the evenings, I wasn’t listening. I would usually fall asleep or dream away while watching them. I was sick as hell, but I didn’t know.

After ten years of going through life, I felt the need to go to vipassana again. This time it was an intense calling and I went all in. I saw people around me talking and was reminded of my first time, but I didn’t speak at all. My eyes were always cast down, but I felt a huge sense of compassion for all those who spoke eventually. I was angry at first, at them because they would talk loudly after the lights went out. I for those moments forgot that I did the same thing ten years ago. Then, I started feeling compassionate because I started understanding my own past self that was sick in the mind and was not willing to give up on what it was used to – talking!

There are intense cravings that crop up; people steal food to eat at night when they aren’t supposed to and of course, talking. But then I ask myself, should the Dhamma worker have asked me to leave as I broke the most important Sila of silence? No. I wouldn’t throw my past self out of that place either, because if I had, I would never have the wisdom over that self, the one that I have now. But something from there stayed with me, all through those ten years – observe the sensations.

Even though I never practiced the technique for all those years, somehow, I was tuned to observe my body while crying or laughing or even while getting angry. I didn’t know what after that, therefore I went with the flow of those emotions,  although I was observing them. Since I went through those ten days only physically, I couldn’t get away from those emotions and understand the ‘unreality’ or the illusory nature of them. I kept judging myself whenever I was angry, sad or excited – there was something to be changed constantly in me. I kept calling myself weird or crazy or whatever other terms I felt like. My deep conditioning was never addressed.

So now, when people tell me that they have done vipassana, I don’t automatically assume that they are somehow better than everyone else, because it’s a process. My karmas were so strong that even though I was at the Dhamma center, I couldn’t do anything. So for me, I could understand it the second time I went, for someone else it might be the third or fourth or the first time itself! The problem is not with the meditative practice, it is the ‘level’ of the person entering the practice. And like S.N. Goenka says, “You must experience it yourself.” Don’t take my word for it, because everyone is different (we are all at different levels), although our core is the same! Metta.