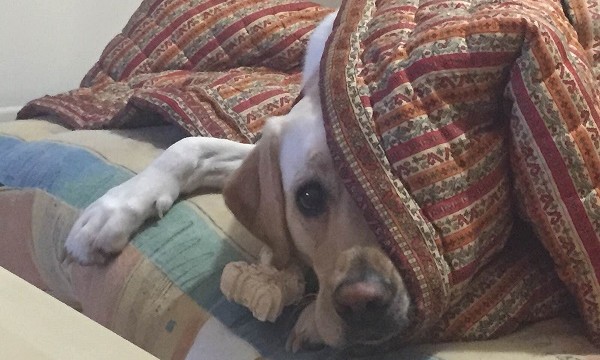 Coming from India where street dogs usually chase you; it is not uncommon to be scared of dogs. And some dogs do look scary for a lot of us who are unfamiliar with them.

But I was almost ‘forced’ into loving a dog due to my roommate, who just one day happened to get a puppy home, while in India. The puppy was really small and cute, and it insisted on attention. It found its way between my feet and stayed there for hours together, sometimes nibbling on my toes. I grew fond of her eventually. My roommate, who had to travel a lot on work, grew comfortable leaving her under my care and I loved it. I usually worked from home, barring a few meetings out of town and the dog kept me alive and active.

We usually went for walks with in our apartment complex which had a huge garden, walkway, and some tennis courts. She was always on leash, even while interacting with other dogs. On one occasion, I had to pick her up from a pet hostel where my roommate usually put her, when both of us were busy. There I saw that she was off-leash in a confined area and was very happy, for obvious reasons. I tried creating that in our apartment tennis court and was shocked  at how offensive people would get on seeing her running freely in a confined space. Of course, we never went when people were playing; it was always when the courts were empty. One lady just picked a fight with me one day to the extent of asking me to prove that I stayed in the same apartment complex, because the dog running there freely was somehow harmful to her kids – when they were not even there!

We always picked up after her. But she wasn’t allowed pretty much anywhere in the apartment complex! My roommate, also could not move to any other housing complex because most of them had ‘No Pets’ policy. But by then I had become used to loving dogs and adopted one when I moved to Toronto, only because life is good for them here. I vowed to never get a dog while in India because most people there were just insane. Being scared of dogs is one thing, but treating them like dirt is another! It was difficult to make them understand that these living beings also need to move around freely, just like we do. I had heard something as ridiculous as, “But your dog pees in the court!” Pee dries too and if that is such a huge problem, then the whole of India needs to be sanitized for kids!

The funny thing is stray dogs,  since they don’t fit into any rules and because most people are scared of them, freely roam around everywhere. Sometimes I wonder if it is better to be a stray dog in India. I cannot be sure of that, after reading about the recent killings of puppies in Hyderabad. People have started considering them too as property!

In Toronto, most people treat dogs like living beings. Some people are allergic to them – so they inform us that they are and leave the elevator apologetically or we don’t enter out of respect for them. They look at pets with affection – whether a dog or a cat, and there are pet-friendly policies in place. There are dog-off leash areas within 10-12 mins distance from most communities and dogs play with each other. A lot of dogs here are well-trained to not jump on people, but some of them, in spite of being trained, do that and most of the times people understand their ‘puppy-like’ nature, even though they might look big. Sometimes, it does scare me that someone in a bad mood might slap a charge on me if my dog jumps on them, but most of the times, I am fear-free.

Here is a link to the pet care in Toronto: Pets

My dog loves being petted by random strangers who have conversations with her sometimes. One might think that everyone picks up after their dogs here; most people do, but there are some who don’t because we do see some dog  poop lying around sometimes. Of course, not picking up after dogs is not as common as in India.

Oh yes, in India whenever we asked the name of another dog it was usually, “What’s his name?” – because even in getting dogs, Indians prefer male dogs! But in Toronto it’s very different, the first question is, “Is your dog male or female?” and usually the next question is, “What’s HER name?” There seem to be equal number of male and female dogs here, and perhaps the numbers are a little skewed towards female dogs. This was an amazing revelation!

On our brief trip to the US, it didn’t seem very different there either, we had fun there as well. And yes, we have play-dates too with other dogs sometimes. 🙂 Overall, I am happy that my dog is very happy here. The first world is definitely a better place for her.