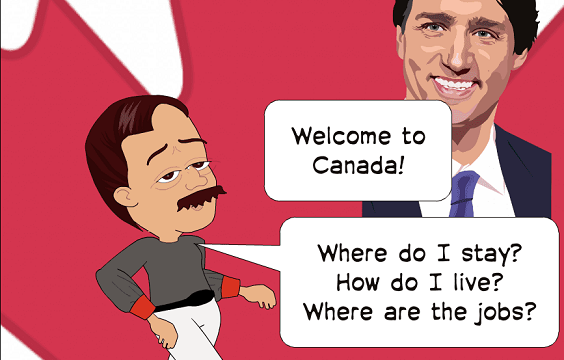 The world sees that Canada’s immigration policies are inclusive and good. Although, ideologically it is an inclusive policy, practically it spells disaster! I am no sociologist or economist, but a regular working guy, who happens to have access to information of common people’s bank accounts, which tells me a lot about where we are heading.

1. Need to replace an ageing workforce:
Workforce is ageing out and yes it needs replacement. But people can’t retire because their pension amount is not enough for their basic survival. Take for instance that a 65 year old who’s worked all his life only makes $524/- in pension and he is yet to pay off his mortgage and feed himself. So he drives an uber, his wife works 7 days a week. So essentially, people want to retire but the dynamics of the economy won’t allow them to, until they die.

2. Canada’s infrastructure is unable to support its people:
Let’s look at some of the existing infrastructure that most people depend on. I am going to start with regular commute.

a. Public Transportation: Canada’s people are not used to “crowds”, they still try to maintain at least a half-arm distance between each other at peak hours when everyone is trying to get to work! I myself have to let go of 2 buses before I can get on the third packed bus for daily commute. Traffic on current network of roads and public transport is already screaming out for support.

There is growth in infrastructure in terms of new TTC plans, job creation schemes, new buildings, pushing the boundaries of major city greater regions etc. However, this won’t be completed in 1 year. It takes 3-5 years minimum to build these which means 300,000 + 320,000 + 350,000 + ..  and so on will already have entered till the time you build for another 300,000. Development rate<immigrant influx, not technically feasible to match either.

b. Scarcity of Hospitals and Schools: Family doctors and hospital beds are difficult to find nowadays. The OHIP does not cover a lot of medical tests already and soon many more of us will end up paying for medical tests! Schools are filled almost to capacity and it is becoming increasingly difficult to find a place for children in the neighbourhood schools.

c. Real Estate Scarcity: An Apartment/condo/house is supposed to have fixed price. But because there is so much demand (more people and less housing), the sizes of residences are reducing to matchboxes, at rates never before seen. There is bidding for a condo and the highest bidder wins except these bids are not public and gives way to sellers bluffing their price hikes.The message is NOT to promote monitored Bidding, the message is to abolish this practice.

Prices of real estate have almost doubled in less than 2 years. Banks thrive on loaning mortgages. As long as the real estate market is strong, banks can thrive on mortgage loans. If real estate drops, mortgage rates drop, when number of mortgages drop, banks forecast negative economy spelling doom for the rest. Not really the best way to run an economy.

3. Skilled and unskilled immigrants in Canada:
What kind of economy are we aiming at building? Most of the people applying to “fast-track” program are either from saturated Asian countries or from war torn and unlivable countries. While the ‘niceness’ is appreciated and such demographics might not even mind working in the unskilled labor jobs, Canada is still not prepared to keep the qualified skilled professionals coming from the developing nations.

What’s the point of bringing in skilled individuals if they are going to work at local dollar stores, fast food chains, or as cleaners, drivers etc? I am myself included in that skilled category having worked at Dollarama, a bank teller job and a call center. You will probably have such people leaving Canada and be left with only unskilled labor, with no hopes to prosper, develop or build the country. Not only are you wasting their time and talent but Canada is unfortunately not being able to tap into their talents.

4. Saturating the already saturated cities:
The obvious choice for most immigrants is Toronto/GTA or Vancouver or Montreal (if you know French). These regions and their greater areas are saturated/saturating at a pace much much faster than redevelopment and expansion.

There are Provincial Nomination Schemes, which are a solution to systematically leading the immigrants and in developing Canada’s undeveloped areas. Under this scheme, new immigrants stay for a good 4-5 years in a province outside the major cities. This acts as a deterrent to most qualified professionals, because most of those areas have no work for the “skilled” demographics.

5. Mismatch Between Government’s Vision and Private Companies’ Short-sightedness: Whether you are an engineer or an accountant or a professional in any field, Canadian companies look for “CANADIAN” experience! What most companies all over the world cover in training in a couple of weeks, companies here expect people to step down to lower cadres, take a pay cut and learn “Canadian” ways which they consider as supposedly different from the rest of the world! The government on the one hand wants skilled professionals to improve the economy but the private companies don’t really seem to understand this.

There are several employment centres set up to help immigrants, but one can count on ones fingers, the number of people who might have found a job in their fields. Essentially, there are a lot of unemployed immigrants or engineers, working at dollar stores.

Also, in Canada, you can work in a job and stay at that level without any growth for your life! TTC increases their fares once every 6 – 8 months, housing prices double, inflation rises, but salary standards don’t budge! After tax cuts, an average person’s salary remains the same. S/he eventually meets the poverty line.

6. Exploitative Volunteering Culture:
Everyone in Canada will say that the best way to “know” people is by volunteering, because if you don’t “know” someone in the company, you won’t get a job, as there is no culture of looking at resumes! This reminds me of finding government jobs in India where you need “sifarish” and you can get a job even you aren’t skilled. It’s the same here, except it’s just passed off as “Canadian”.

So since you need to know someone, most people start volunteering but the sad fact is that this volunteering rarely converts into a job! So you just pretty much work without getting paid, with mouths to feed.

7. Increase in Crime Rate: Since everyone is struggling to live, crime is bound to increase. Crime has increased to levels not known earlier. Canada was supposed to be a safe nice place but that’s questionable today.

The Canadian immigration is based on an online application and since a lot of the applicants are also coming from regions of high risk, there is scope of them finding immigrating to Canada, as a loop hole in Security. This could pose a serious security threat in the future.

8. Let’s Just Say All This is for a Vote Bank: As a Permanent Resident(PR), I cannot vote. If you need votes and are bringing in these people so they favor your party, they still cannot vote. The rule to reduce 4 year residency requirement to 3 years is still not approved. It will need to be 2 years to benefit your party.

9. Immigration as a Way to Grow Canada’s Economy:
Just so that Canada does not face economic problems in 50-100 years, you start the process of getting more people here. That’s a great thought, but it needs serious cultural change in the country to be able to implement this vision. Also, the rate of influx is way more than the country can handle at this point in time.  It simply does not have the infrastructure to support what currently is and therefore certainly will not be able to take care of 300,000+ immigrants entering per year and growing from there on.

Also, where are the jobs to fill incoming 300,000+ immigrants per year??? They are just going to be liability to the government adding to the free health care, unemployment and crime.

Does Canada need immigrants? Yes, it does if it wants to grow and support its ageing population. But and this is a BIG BUT, it needs to change a lot of its policies of employment:

Since all of the above isn’t happening, guess what, the socio-economic problem which was due 50-100 years from now, is about to rain down very soon. We will be looking at mass poverty!