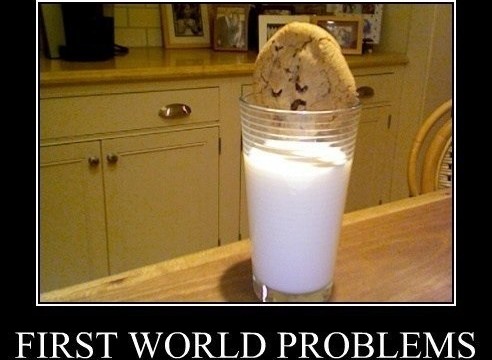 Sometimes I catch a virus called First World Problems or FWP for short. Given below is a short summary of the FWP disease.

Definition: First world problem virus is endemic to the well-endowed class. This virus usually makes people forget the big picture and helps them focus on trivial and shallow problems.

(For e.g.: Not finding my favorite pasta sauce and having to settle for a different pasta sauce makes me annoyed. Instead of being grateful for being able to afford the food I want to eat, I am angry for having to change my dinner plans.)

Cause: Usually triggered by interacting with people under very normal circumstances.

Cure: Eating high calorie junk food and moving on to the denial phase.

How I caught this virus three days back:

It was a normal Friday afternoon. I had a productive day and was in a good mood. I was waiting in line at the USC pharmacy to pick up my prescription medications. That’s when I noticed him. He was soooooo gorgeous. He looked like some chiseled Greek god with his blond hair and blue eyes. He picked up something from the medicines aisle and caught me staring at him. He smiled back and started talking to me. Americans are really good at ‘small talk’. Now he is after me in the line. He asked me if I wanted to grab coffee with him at Ronald Tutor Hall. I have never been on dates with strangers. To be honest I don’t go on dates. But being asked out by a hot guy is a huge ego booster and it made me reckless. I said yes.

Two counters opened up at the same time. So the handsome hunk and myself stand next to each other and begin checking out our meds at our respective counters. The pharmacist at the hunk’s counter asked him for his date of birth. He said ‘ 5th May 1996’. Knowing that he is 9 years younger than me and is younger than my younger sister made me hyperventilate. Why? Because I felt like a moron for having a crush on a boy, younger than my sister. Thankfully I finished my transaction before him and fled without taking a second look at him. The FWP virus had successfully entered my system.

Manifestation of the symptoms:

I ran out of the pharmacy and contemplated on places to hide. I felt ancient. I felt like a cradle-robbing pervert. I hated being old. Thus the self-loathing and self-doubt began. I had gone from being immensely happy to having an intense identity crisis in less than 7 minutes. I know I should be feeling happy that a hot 18-year old flirted with me. I should feel happy that I look young and have good health. Yet I chose to ignore that. The virus is very strong you see. Its really good at the work it does. I decided to cut short my day and walked to the train station so that I could go home. My home is my bat-cave. It’s ‘the place’ to hide and sulk till I find a cure to the FWP virus.

There isn’t a fixed cure for FWP’s. It is usually a trial and error of various activities until you stumble upon one that helps. You also have to repeat that activity long enough for you to forget your identity crisis and transition into denial. I cure my FWP by finding activities that involve eating fattening food (I will think about cardiac arrest and diabetes after I recover) and watching TV shows.

I woke up the next morning feeling shallow and stupid. I had recovered from my bout of FWP. I counted my blessings and felt extremely grateful for the life I had and moved on. But I could feel the virus lurking around in the corner waiting for its next opportunity to strike me. I am a 100% sure that the virus doesn’t have to wait very long.

P.S: If I could ever compete with Marie Antoinette for shallowness I am sure I would win by a wide margin.